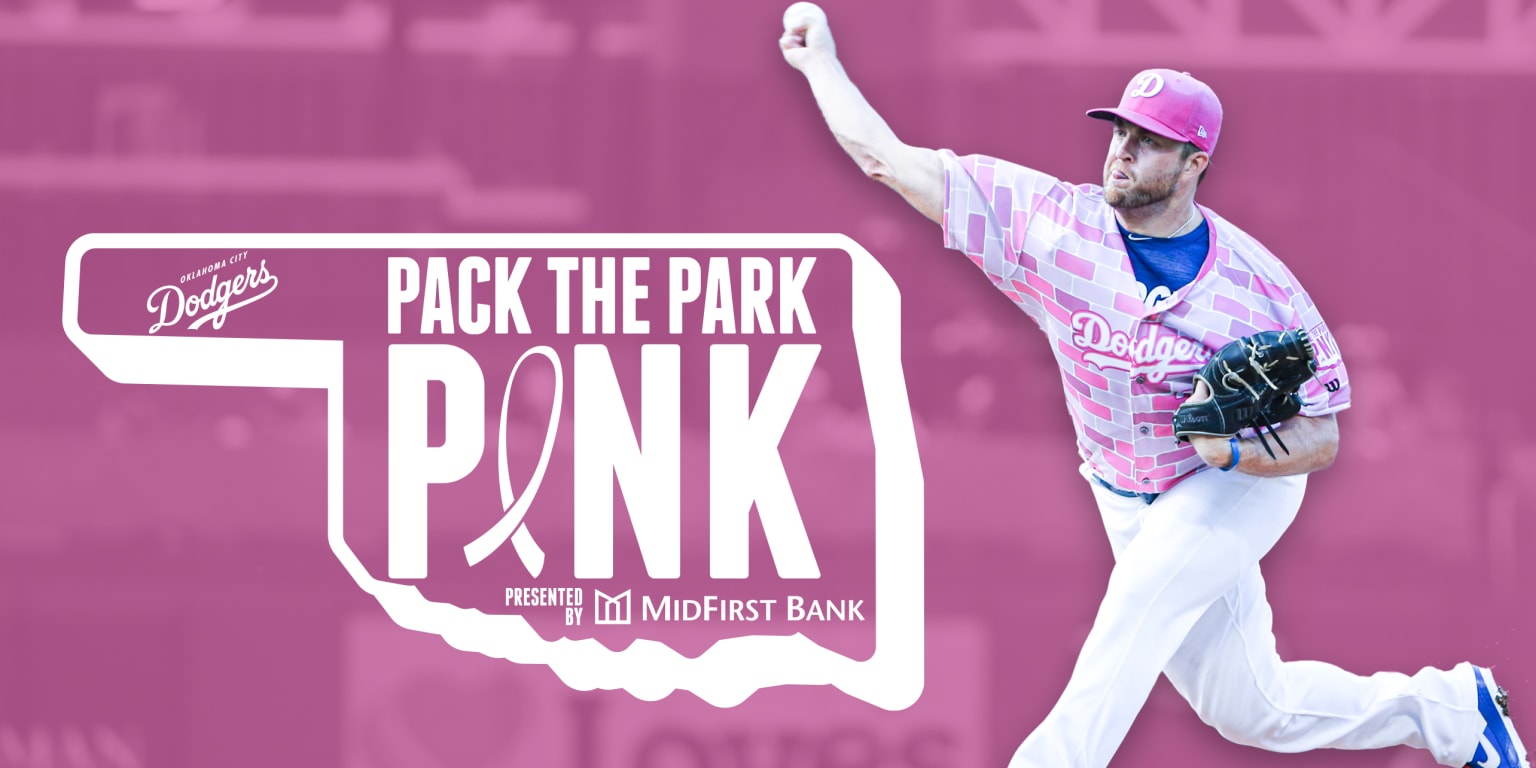 OKLAHOMA CITY – Oklahoma City Dodgers players and coaches will wear special pink jerseys and hats that will be auctioned off to benefit Susan G. Komen Oklahoma as the Dodgers and MidFirst Bank team up to “Pack the Park Pink” Friday night.

The Dodgers will take the field at Chickasaw Bricktown Ballpark at 7:05 p.m. Friday against the Las Vegas Aviators and fans can bid on their game-worn pink jerseys and hats via the DASH Auction app, which is available for free via the App Store and Google Play Store.

Unique events to promote breast cancer awareness will be held throughout the evening at Chickasaw Bricktown Ballpark and “Pack the Park Pink” will culminate with a pink fireworks show following the game, presented by MidFirst Bank.

Fans are encouraged to wear pink in support of the cause and representatives from Susan G. Komen Oklahoma will be on the concourse throughout the night to provide information about the organization. The mission of Susan G. Komen Oklahoma is “to save lives by meeting the most critical needs in our communities and investing in breakthrough research to prevent and cure breast cancer.”

Oklahoma City-area breast cancer survivors will take the field pregame during the announcement of the starting lineup, sing the national anthem and deliver a ceremonial first pitch. A unique and fun photo opportunity featuring a balloon arch, backdrop and light-up “OKC” marquee letters will be on display on the concourse for fans to use throughout the game. A breast cancer awareness quiz in Friday night’s digital PlayBall! game program can be completed and redeemed for an exclusive OKC Dodgers color-changing cup.

The OKC Dodgers return home to open a 12-game homestand as well as a six-game home series against the Las Vegas Aviators at 7:05 p.m. Thursday. The series then continues with Friday night’s “Pack the Park Pink” game.

Saturday’s 7:05 p.m. game between the team falls on Marvel Super Hero Night, and Star-Lord and Black Widow will make special appearances throughout the game. Kids can run the bases following Sunday’s 6:05 p.m. game. The series against Las Vegas wraps up with 7:05 p.m. games Monday and on a $2 Tuesday, featuring $2 select beer, soda and bottled water from a line of Budweiser and Pepsi products. COOP Ale Works draft beer will also be available at a special rate of $3 Tuesday. The OKC Dodgers then remain home for a six-game series against the Albuquerque Isotopes Thursday, Sept. 2 – Tuesday, Sept. 7 at Chickasaw Bricktown Ballpark.

Tickets are available by visiting okcdodgers.com/tickets. Live radio coverage of each OKC Dodgers game begins 15 minutes before first pitch on AM 1340 “The Game,” 1340thegame.com and through the free iHeartRadio or MiLB First Pitch apps. All OKC Dodgers games are also available streamed live on MiLB.TV with a subscription. For additional information, please call the Dodgers front office at (405) 218-2182.