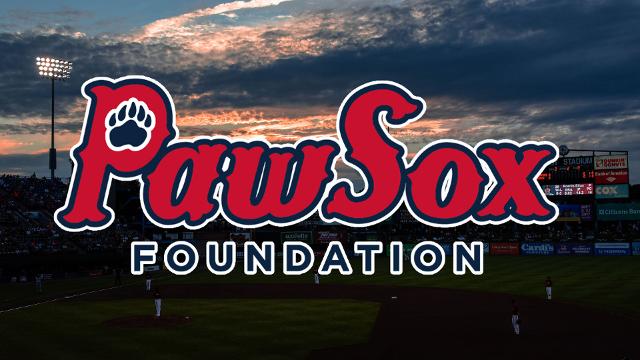 After the Scranton/Wilkes-Barre RailRiders announced that they will present “The Empire Gives Back” at PNC Field on their annual Star Wars Night May 4, and that they will honor Red Sox Nation’s “villain du jour,” Tyler Austin, who survived testicular pediatric cancer at age 17, the PawSox/Skeffington Charitable Foundation will make a donation of $2,004 to the RailRiders’ charitable efforts, and will send memorabilia that can raise additional funds at their charity auction.

“The Red Sox and Yankees have one of the great rivalries in the world of sport,” said PawSox President Dr. Charles Steinberg, “And they have also come together in compassion and unity in the face of real enemies, such as pediatric cancer. While fans enjoy the battle between the lines, we are grateful for the oncology research that has allowed Tyler Austin to participate in such battles. We wish the best of health to him and to all who battle these horrible diseases.

“We have been inspired by displays of sportsmanship demonstrated when cities of teams have been injured, and we have been keenly aware of the display of generosity by the late George Steinbrenner and his family during the annual Red Sox/Jimmy Fund Radiotelethon that benefits the Dana-Farber Cancer Institute.

“When it comes to matters that matter, our organizations can do a world of good, especially when we work as one.”

Throughout the world of baseball, May 4 is often a Star Wars night, in a play on “May the force [or fourth] be with you.”

The PawSox, who are visiting their rivals on May 4, will hold their own Star Wars night on Saturday, June 9. It is the fastest-selling game of the year.

The PawSox welcome the Yankees’ Triple-A Club to Pawtucket this Saturday for a 6:15 pm and Sunday at 1:35 on “Evil Empire Weekend” at McCoy Stadium. Tickets and information are available via pawsox.com, by calling (401) 724-7300, or in person at the McCoy Box Office.