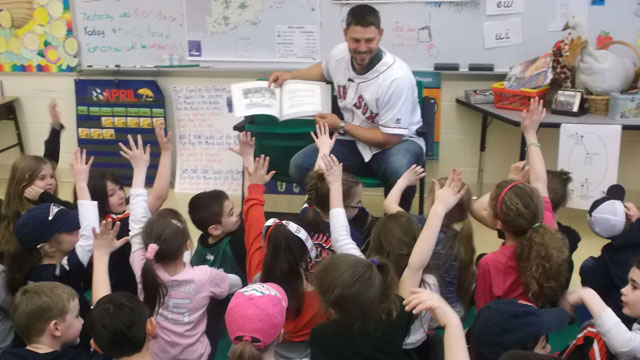 Minor League Baseball announced today that the Pawtucket Red Sox are the recipients of the second annual John Henry Moss Community Service Award. The award was created in 2013 by Minor League Baseball in honor of the late John Henry Moss, who founded what would become the South Atlantic League in 1959 and headed the circuit until 2007. In its inaugural year, the Grand Junction Rockies were named the winners of the recognition. The Pawtucket Red Sox will receive their award at the Baseball Winter Meetings Banquet on Sunday, Dec. 7, at the Hilton San Diego Bayfront in San Diego, California.

“The PawSox family is extremely honored to be selected for the 2014 John Henry Moss Community Service Award,” said Pawtucket Red Sox President Mike Tamburro. “The role of any successful franchise must be to help lift those in its community who are in need. The past four decades we have quietly tried to do our part.

“We take great pride in our ongoing efforts to enhance the quality of life within our community and for creating partnerships that have carried on for generations. We share this award with our community, our Major League partner the Boston Red Sox and our wonderful fans who make all our charitable efforts possible,” added Tamburro.

For the last 38 seasons, the Pawtucket Red Sox have been an integral part of their local community. Along with providing the best in affordable family entertainment, the PawSox primary goal as a team is to be actively involved in making a difference in Southeastern New England. The PawSox are strong financial supporters of countless charitable organizations and youth-based programs in their area, and every staff member either serves on a Board of Directors, sits on Advisory Council or volunteers in some capacity with multiple community organizations.

The Pawtucket Red Sox Charitable Trust has contributed to hundreds of charitable organizations and important causes in the area, donating more than $250,000 during the last five years. For almost 40 years, the PawSox have also contributed to local charities through the team’s Ticket Fundraiser Program. This program has donated more than $200,000 over the last five years to worthy organizations such as American Parkinson’s Disease Association and the American Cancer Society, among many others.

The PawSox have also supported their community by hosting a number of fundraising events on non-gamedays including the Jeffrey Osborne Foundation, which benefits inner city youngsters in the Providence, Rhode Island, area. This event included an All-Star Softball Classic game held at McCoy Stadium featuring celebrities from the sports and entertainment worlds. Light the Night Leukemia Walk, held on Sept. 27, at McCoy Stadium, was another of the team’s non-gameday events. Approximately 2,000 walkers participated and raised $250,000 for the Leukemia and Lymphoma Society.

Both the Boy Scouts of America and the Girl Scouts have benefited from the PawSox generosity to the community. For the last five years, the PawSox have hosted five events at McCoy Stadium annually and donated $10,000 each year to the Boy Scouts. The team has also hosted the Girl Scouts Project Undercover, a clothing drive for needy families in the community, collecting hundreds of new socks, underwear and diapers.

Although the PawSox are busy contributing to the community year-round, the team also supports its own employees by providing five $2,000 college scholarships to seasonal workers who are selected based on their outstanding work ethic during the season.

“It is well established that all members of the professional baseball family are extremely generous with their time, money and efforts in support of their local community,” Randy Mobley, International League President, stated. “The heart of the Pawtucket Red Sox organization is big enough to not only fill Rhode Island, but much of New England. Following the lead of Mike Tamburro and Lou Schwechheimer, this organization has a well-earned reputation for being a selfless regional treasure that is ready to assist and lend its support to all that is good for the community.”

This article originally appeared on the official website of the Pawtucket Red Sox. Click here to view the original story.