The Charleston RiverDogs will be offering military personnel $5 tickets all season at Joseph P. Riley, Jr. Park thanks to General Dynamics Land Systems–Force Protection. Plus, the club has planned several Military Appreciation Nights and military-themed promotions throughout the season.

Fridays will feature a sea of red at Riley Park as the popular family-friendly General Dynamics Land Systems-Force Protection Red Shirt Friday returns. All fans who wear red shirts to the game on Friday will save $1 off the purchase of their ticket at the box office, plus RiverDogs players and coaches will be wearing special red digi-camo jerseys. The dollar saved by fans off of their ticket can be donated to benefit the charity Carolina Canines, a local charity which works with military prisoners at the Naval Consolidated Brig in Charleston and teaches them how to train rescue dogs as service animals for wounded and injured veterans. Additionally, information on the Medal of Honor Museum at nearby Patriots Point will be on hand throughout the season at the Guest Relations booth.

In addition to the military theme on Friday nights, the RiverDogs are also hosting three different Military Appreciation Nights: Thursday April, 25, Saturday July, 13 and Wednesday, August, 25. Each Military Night allows active and retired military members FREE entry for themselves and their family members by showing a Military ID at the box office.

In addition, the RiverDogs will be hosting Coast Guard Night on Thursday, May 23. This is a night to salute Coast Guard Sector Charleston. Game time is set for 7:05 pm as the RiverDogs host the rival Greenville Drive. 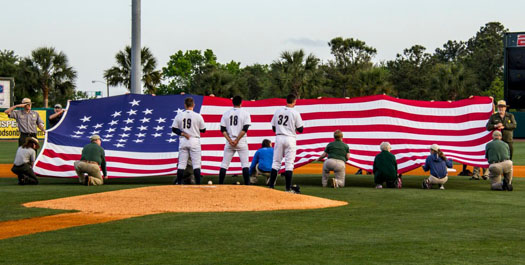