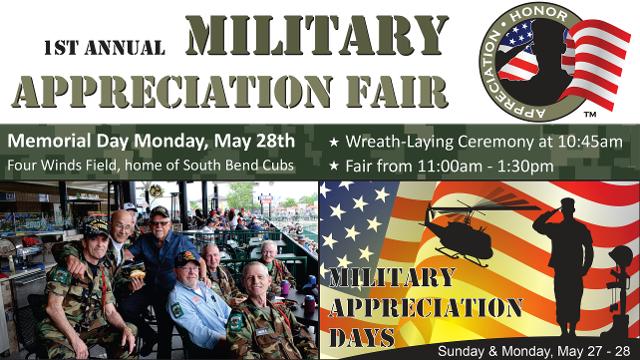 SOUTH BEND, IN – As a kickoff to South Bend’s “Best.Week.Ever.” festival, the South Bend Cubs will host the inaugural Military Honor & Appreciation Fair at Four Winds Field on Monday May 28. The fair is part of “Armed Forces Week”, a special week of home games dedicated to the United States military service branches starting on Monday, May 21st and culminating with Military Appreciation Days on Sunday evening and Memorial Day.

“Every year, we are honored to partner with Express Employment Professionals over Memorial Day weekend,” said South Bend Cubs President Joe Hart. “This season, we have expanded the weekend to include the full eight game homestand as well as a Military Honor and Appreciation Fair to help bring awareness to issues that our active duty military and veterans are facing.”

Co-hosted by Express Employment Professionals, Military Appreciation Days on Sunday, May 27 and Memorial Day, May 28, will honor veterans and currently-serving military personnel by offering two free tickets to either the Sunday or Monday games with proof of service.

On Sunday, visitors around the Four Winds Field Plaza will be visually inspired by 50 US flags placed in-line by the Indiana Patriot Guard Riders in dedication to Vietnam veterans. This display will recognize members of the Vietnam Veterans of America. The Combat Veterans Motorcycle Association will also ride their motorcycles onto the field, which will be followed by a live flyover and field landing of UH-1 Huey 369, a restored Huey helicopter from American Huey 369 out of Peru, Indiana.

Following the ceremony will be the Military Appreciation Fair. Over 25 local military service organizations will be represented along with military vehicles and equipment on display. There will also be a paintball shooting booth from BlastCamp out of Hobart, Indiana. All events on Monday will take place outside of Gates A & B in the Four Winds Field plaza.

Prior to first pitch on Monday, the families of fallen service members will be recognized on the field, organized by US Army Survivor Outreach Services and Helping Hands for Freedom.

In addition to the events on May 27 and 28, the South Bend Cubs and Express Employment Professionals will host a food drive during all eight games. Nearly 25% of food insecure Hoosiers are our military veterans. All food and money collected will benefit the Food Bank of Northern Indiana and their area food agencies, who help feed hungry and food insecure families across North-Central Indiana.

About the South Bend Cubs
The South Bend Cubs are the Class A minor league affiliate of the 2016 World Series Champion Chicago Cubs. Over the past 30 seasons, the team has won five Midwest League titles, most recently in 2005, and has captured 12 division titles. This year, Four Winds Field, home of the Cubs, was named Ballpark Digest’s Best Single-A ballpark. In 2015, the team was named Ballpark Digest’s Team of the Year and received the John H. Johnson President’s Award, the highest award in minor league baseball. The team is owned and operated by Swing-Batter-Swing, LLC whose sole shareholder is Andrew T. Berlin of Chicago, Ill.