Richmond Tabbed by Eastern League for Award in 5th Season 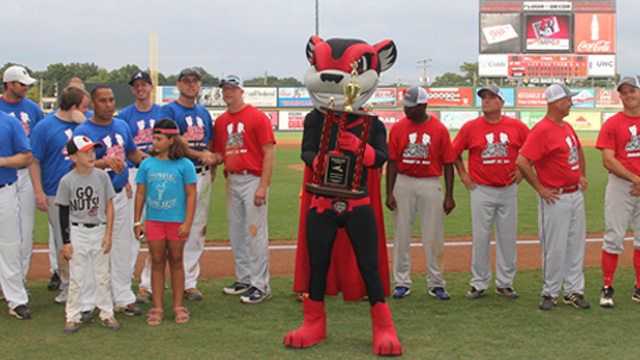 The Richmond Flying Squirrels, Double-A affiliate of the San Francisco Giants, are pleased to announce that the organization has been nominated by the Eastern League of Professional Baseball Clubs for the 2014 John Henry Moss Community Service Award. The league nominates just one team for the award, presented annually by Minor League Baseball.

The John Henry Moss Community Service Award is bestowed upon a club that demonstrates an outstanding, on-going commitment to charitable service, support and leadership within their local community and within the baseball industry.

Community impact has been a foundational focal point for the Squirrels since their inception in 2010. The Squirrels’ nomination comes following a season in which they continued to expand many of their community aims. That included the launch of the Squirrels’ new non-profit arm, Flying Squirrels Charities, created with the goal of growing opportunities for local children. The first major fundraising campaign for Flying Squirrels Charities was “Smooch-a-Pig,” which included the involvement of 10 local celebrities and benefitted “Operation Renovation.” The campaign, which endeavored to rebuild 12 little league fields for the Richmond City Department of Parks & Recreation, raised over $60,000.

“There are many awards that the Squirrels as an organization would be delighted to receive,” said Flying Squirrels’ Vice President & COO Todd “Parney” Parnell. “However, this nomination is of particular significance to us. Community service is the bedrock of the Squirrels’ organization, and it is gratifying that our sustained effort continues to have a profound impact.”

The Squirrels continue to be one of the most active teams in professional sports within their community. Among their other programs and highlights:

The John Henry Moss Community Service Award is named after the longtime, former South Atlantic League president, who founded the SAL and presided over it for a half-century (1959-2008).

The John Henry Moss Community Service Award will be presented at the Baseball Winter Meetings, which will be held in San Diego, CA, from December 7-11.

This article originally appeared on the official website of the Richmond Flying Squirrels. Click here to view the original story.