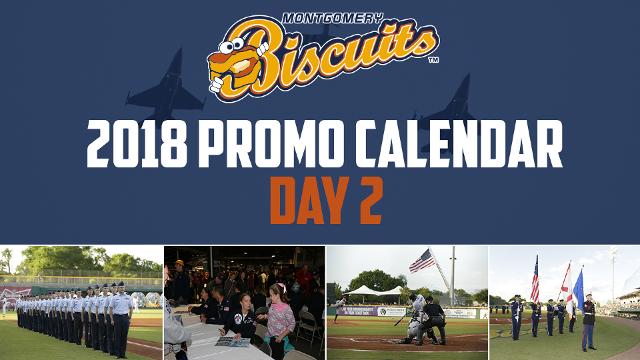 The Montgomery Biscuits continued their four-day schedule of promotional announcements on Wednesday by announcing their Military themed promotions for the 2018 season, including a special new ticket discount for our Armed Forces.

As winners of the 2017 Southern League Patriot Award for outstanding support of, and engagement with the U.S. Armed Forces, the Biscuits look to continue their support and recognition for the River Region’s military families. For the first time, any person with a valid military ID will receive a $3 discount on any ticket to all 70 Biscuit home games. Military personnel (including retired and Veteran status) will also receive food and drink specials during the Biscuits weekly “Military Wednesday” promotion.

The Biscuits are also planning some large scale events to honor and recognize the military in 2018, beginning with Opening Weekend. On Friday, April 6th, the Biscuits will be holding a “Maxwell AFB Centennial” celebration, honoring the 100th Anniversary of the opening of Maxwell Air Force Base in Montgomery, complete with a pre-game flyover.

The yearly “Military Appreciation Night” will occur on Saturday, May 12th. Tickets will be made available for military personnel for only $5 courtesy of the Montgomery Area Chamber of Commerce and the night will feature in-game promotions recognizing our local military heroes and in-stadium displays. The night will also conclude with a MAX Fireworks Spectacular.

Legends of aviation will arrive at Riverwalk Stadium on Tuesday, May 29th as the Air Command and Staff College host the “Gathering of Eagles“, a yearly collection of historically significant aviation legends coming together to tell their stories. The Biscuits will host the only public appearances of the “Eagles” and fans will get a chance to meet and get autographs during the game.

The Biscuits are also planning an exciting premium giveaway courtesy of Auburn University Montgomery recognizing the military aviation history, present, and future of Montgomery with a dual figurine featuring the C-130 aircraft from the 908nd Airlift Wing and the newly announced F-35 Lightning II Jet which is set to arrive at the 187th Fighter Wing in 2023. The C-130 figurine will be given away on Saturday, June 2nd and the F-35 figurine will be given away on Wednesday, August 8th. Both figurines will be able to be joined together to create one commemorative keepsake.

The Biscuits have created a special “Military Ticket Pack” to honor those who serve. With a valid military ID, fans can purchase the “Military Pack” and receive 10 undated Biscuits tickets good for any game, a custom Biscuits Challenge Coin, and $10 in Food Bucks for use at Riverwalk Stadium. Fans can purchase this pack by visiting the Riverwalk Stadium Box Office, visiting biscuitsbaseball.com, or calling (334) 323-2255.