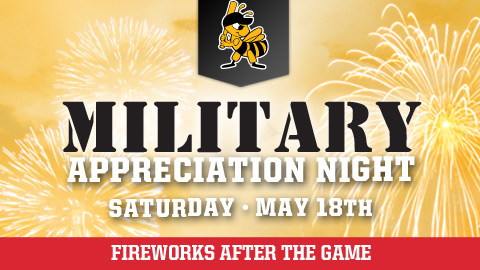 SALT LAKE CITY (May 16, 2013) – The Salt Lake Bees will honor men and women of the United States Armed Forces during Military Appreciation Night, sponsored by Larry H. Miller Collision Centers, on Saturday, May 18 as the Bees take on the Nashville Sounds at 6:35 p.m. The team will wear camouflage jerseys during the event.

F-16 pilot and commander of the 419th Fighter Wing at Hill Air Force Base, Colonel Bryan Radliff, will throw out the ceremonial first pitch. The 419th Fighter Wing Anthem Choir, also from Hill Air Force Base, will perform the national anthem and sing “God Bless America” during the seventh-inning stretch. A special military-themed fireworks show will begin at the conclusion of the game.

The Salt Lake Bees return home for an eight-game homestand tonight against the Nashville Sounds at 6:35 p.m. All drinks are $2.75 on Thursdays at Spring Mobile Ballpark. For more information, call (801) 325-BASE or visit slbees.com.

This article originally appeared on the official website of the Salt Lake Bees. Click here to view the original story.