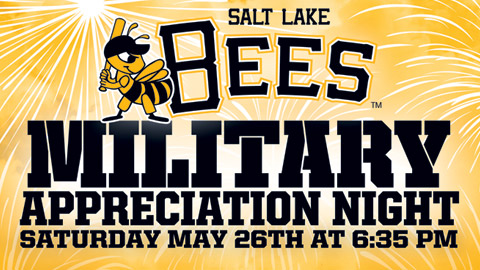 SALT LAKE CITY – The Salt Lake Bees will honor men and women of the United States Armed Forces during Military Appreciation Night, sponsored by University of Phoenix, on Saturday, May 26 as the Bees take on the Las Vegas 51s at 6:35 p.m. The team will wear camouflage jerseys during the event.

The Bees are offering half-priced tickets for Saturday’s game, available to all military personnel and their families who provide military identification at the Spring Mobile Ballpark box office.

The pregame ceremony will include an on-field parachute jump by the Compulsive Flyers, a giant outfield flag display, the presentation of the colors by the United States Marine Corps and the performance of the national anthem by the 419th Fighter Wing Anthem Choir from Hill Air Force Base.

A concourse booth will be open throughout the game to allow fans an opportunity to send a message via postcard to active military personnel. The 419th Fighter Wing Anthem Choir will also perform “God Bless America” during the seventh-inning stretch and a postgame fireworks show will begin at the conclusion of the game.

The Salt Lake Bees return home for an eight-game homestand beginning tomorrow, Friday, May 25 against the Las Vegas 51s at 6:35 p.m. 2012 Bees season tickets are on sale now with prices starting at just $432 per person. For more information, call (801) 325-BASE or visit slbees.com.

This article originally appeared on the official website of the Salt Lake Bees. Click here to view the original story.