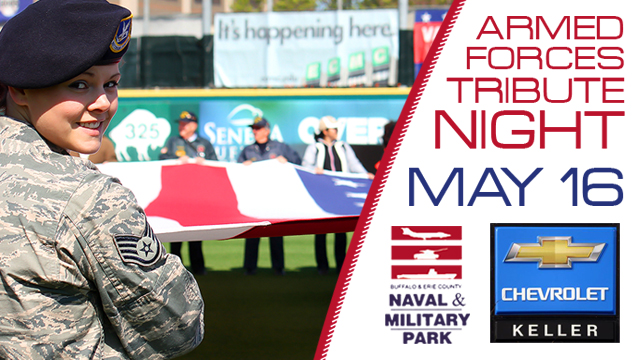 The Buffalo Bisons have teamed up again with the Buffalo and Erie County Naval & Military Park for the 2nd annual Armed Forces Tribute Night at Coca-Cola Field on Saturday, May 16 when the Bisons host the Toledo Mud Hens. The first pitch is at 5:05 p.m. with an elaborate pre-game ceremony starting at 4:30 p.m.

The Naval & Military Park are selling reserved seat tickets to the game for $10 with $5 of the advance-only sales being donated to the Park from the Bisons for the maintenance and preservation of the USS The Sullivans. Advance sale tickets may purchased on-line at www.buffalonavalpark.org or by calling (716) 847-1773 (ext. 18 or 10).

The USS The Sullivans, a Fletcher-class destroyer, was named after the Sullivan family lost five brothers (George, Francis, Joseph, Madison and Albert) ages 20-27 onboard the USS Juneau which was sunk by a Japanese submarine in 1942 during World War II. The USS The Sullivans, the USS Little Rock, the nation’s only guided missile cruiser the submarine USS Croaker, are all docked and on display at the Naval & Military Park at Canalside.

“This is a major fund raiser for the Park and we look forward to everyone coming out to show their support for the men and women of this area who are now serving or have served in our Armed Forces. Please join us in honoring our troops,” said Deborah Billoni, chairperson of the Tribute Day committee.

LOOKING FOR A VETERANS TO HOLD THE FLAG
Among the pre-game festivities is the display of a large American flag in the outfield. Veterans at the game are invited to enter the field to hold the largest American flag to ever be on display at Coca-Cola Field. Veterans (uniforms are not necessary) are to report to the Naval & Military Park’s Command Post inside the ballpark’s Washington Street gate by 4:15 p.m. and ask for Col. Bob Pecoraro.

The 30×60-foot flag that weighs 75 pounds and flies on Buffalo’s waterfront adjacent to the Naval & Military Park, will be held by more than 100 military veterans, Sea Cadets and Civil Air Patrol members.

“We need the veterans to hold the flag in center field during the ceremony to showcase the local members of the Armed Forces so the public can say, ‘Thank You,'” said Billoni. The flag will be held during the display of colors and the singing of the Canadian and American national anthems.

Other pre-game activities include the giving away of commemorative military challenge coin to the first 2,000 fans through the Swan St. Gate (open at 4 p.m.). and the 2nd annual Francis E. Mooney Comrades Appreciation Award presentations. This year’s recipients are:

The late Helen G. Jacob, a pioneer in getting women involved with the Armed Services. She joined the U.S. Army (Women’s Auxiliary Corps) and was deployed to France as an Administrative Assistant during World War II. She had a 27-year career working at the Veterans Administration Hospital in Buffalo and after retiring in 1995, she returned as a volunteer. She died on March 2nd.

The late Merrell A. Lane, who served as a Staff Sergeant in the U.S. Army in Vietnam, was the longtime leader of a group that helped to save the Niagara Falls Air Reserve Station from closing.

First Sergeant Nelson Oldfield, who served our country for 24 years in the U.S. Army, and who continues his dedication to veterans and the community through numerous volunteer activities.

Captain Roger L. Woodworth, a commissioned officer with over eight years of active military service in the U.S. Army, he was appointed the first President and Chief Executive Officer and founding charter member of Veterans One-stop Center of Western New York, Inc.

Charlie Yeager was an influential local businessman who was a key member of the original organizing committee to bring the ships here in 1977. He handled the park’s insurance for over 30 years and continues to be a strong supporter of the park.

This article originally appeared on the official website of the Buffalo Bisons. Click here to view the original story.