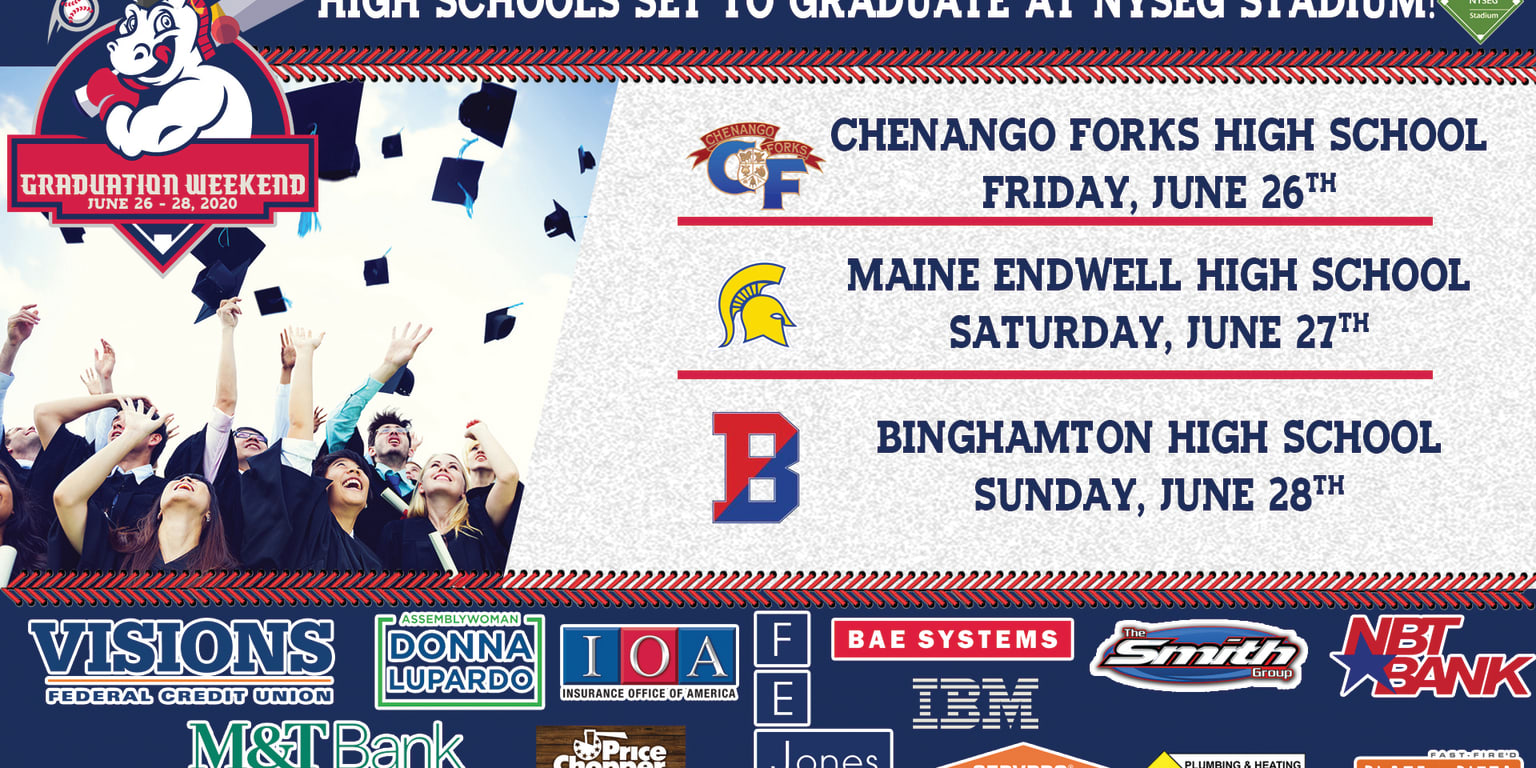 “It was important for us to work with the schools and host Graduation Weekend at NYSEG Stadium,” said Managing Director, John Bayne. “The Seniors have worked hard for this moment, and students and proud parents deserve a Graduation ceremony. The Rumble Ponies are happy we can partner with the local school districts to shine a spotlight on these graduates.”

In accordance with the guidance from Governor Andrew Cuomo all groups will be limited to 150 people, proper sanitation and social distancing will be observed. All spectators, graduates, administrators, and support staff will also be required to wear a face mask while attending the ceremonies.

NYSEG Stadium will be thoroughly sanitized between sessions to ensure the health and safety of all attending Graduation Weekend.

“This is a real community event and shows how strong the Southern Tier is,” said Bayne. “Without the assistance of the sponsors none of this would have been possible.” Sponsors for the event include: BAE Systems, FE Jones Construction, M&T Bank, The Smith Group, Friends of Donna Lupardo, Insurance Office of America, IBM, Price Chopper, Servpro, Visions Federal Credit Union, NBT Bank, Blaze Pizza, and J&K Plumbing & Heating.

The Binghamton Rumble Ponies are the Double-A Affiliate of the New York Mets. For more information follow along with the Ponies on Facebook facebook.com/RumblePoniesBB, or on Twitter at @RumblePoniesBB.

BINGHAMTON, NY – On Wednesday, September 21, 2016 the Binghamton Mets issued a reading challenge to all of the elementary schools within the Binghamton Central School District. The grand prize – the winning school will assist the Double-A Mets Affiliate with the announcement of their new team name in November.

It was important for the organization to partner with the local Binghamton Central School District elementary schools as a way of furthering our ties to the local Binghamton community. At the end of the day, the Double-A Mets Affiliate will proudly say “Binghamton” right across the chest of the jerseys. Therefore, we are proud to partner with Calvin Coolidge, Benjamin Elementary, Horace Mann, MacArthur, Theodore Roosevelt, Thomas Jefferson, Woodrow Wilson, and St. John’s for this friendly challenge amongst the Binghamton schools.

From September 21st through October 21st the Binghamton Mets are looking to see which of the eight schools can read the most combined minutes per student. Each student within the district has been provided with an Independent Reading log to track his or her progress. For the entire month (as well as the entire school year) students will keep track of all their time spent reading within the classroom and outside the classroom. On October 24th all schools will submit their final data for the Binghamton Mets staff to review. After all of the data is reviewed the Binghamton Mets will announce the winners of the reading challenge that same week.

The winning school will then be bused and provided lunch at NYSEG Stadium in November for the unveiling of the new team.

To enter the drawing, a representative from each League is invited to acquire an application from Jesse Scaglion at the Binghamton Mets via email (jesse@bmets.com) or phone (607) 723-6387. The deadline to enter is Monday, April 13. Winners will be announced on Friday, April 17.

Five Little Leagues selected in the drawing will win terrific prizes including a $500 gift card to Maines Food & Party Warehouse and the chance to take the field at NYSEG Stadium alongside B-Mets players as part of the Field of Dreams program. Winning Leagues will also get a visit from B-Mets players and mascots at their field during the season. Maines will provide a concession stand makeover for all five winning Leagues.

This article originally appeared on the official website of the Binghamton Mets. Click here to view the original story.

Binghamton Mets officials joined Dunkin’ Donuts franchisees to donate 200 pounds of coffee to the Food Bank of the Southern Tier prior to the Mets’ final game of the season on Labor Day. The donation – the equivalent of more than 10,000 cups of coffee – was fueled by a season-long partnership between the Mets and Dunkin’ Donuts.

“Our partnership with the Binghamton Mets is designed to capture the excitement of each double play and turn it into a tangible benefit for the Food Bank of the Southern Tier,” said Eric Stensland, upstate New York field marketing manager for Dunkin’ Donuts. “Binghamton players did a terrific job this season and we’re proud to make a donation to an organization that continues to have such a positive impact on the community.”

“Many of us look forward to a cup of coffee each morning and see it as an essential part of starting our day,” said Missy Goetschius, community and public relations manager for the Food Bank of the Southern Tier. “We are extremely grateful that Dunkin’ Donuts and the Binghamton Mets teamed up to give back to our food bank. Now we can provide coffee for thousands of residents in need throughout our area.”

Each week, over 11,000 individuals visit a hunger-relief agency served by the Food Bank of the Southern Tier. In 2011, the Food Bank distributed nearly seven million pounds of food to neighbors in need across the six Southern Tier counties of Broome, Chemung, Schuyler, Steuben, Tioga, and Tompkins.

“The Binghamton Mets are proud to take part in this outstanding initiative to benefit the Food Bank,” said Binghamton General Manager Jim Weed. “Our organization is deeply committed to giving back to our fans and to the community at large. Dunkin’ Donuts has been a great partner and we applaud its commitment to the Food Bank and those it serves.”

The Dunkin’ Donuts and Binghamton Mets partnership has included a number of fan and community initiatives at NYSEG Stadium during the 2012 season.