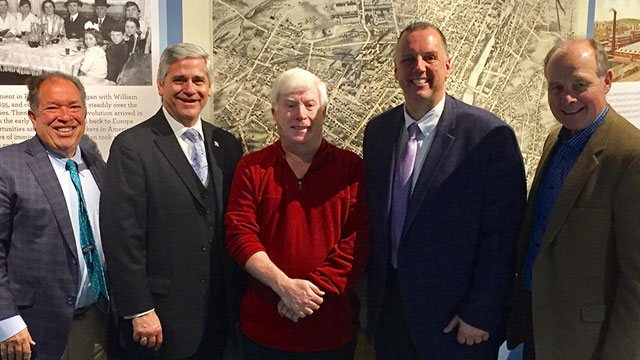 The Pawtucket Red Sox and the PawSox/Skeffington Charitable Foundation today announced exciting changes to their annual 5K Walk ‘N Run, which this year will take place on Saturday, May 20th at 9:30 am with the route both starting and finishing at McCoy Stadium. An earlier time of year (the race was held Labor Day weekend the past five years), a revamped course which will now take runners by downtown Pawtucket, and an enhanced partnership with area veterans are among the new highlights for this popular event.

The revitalized PawSox Foundation, now in its 18th year, has worked closely with both Operation Stand Down RI and 21 Heroes among other veterans organizations. Proceeds from the race will benefit the Foundation’s veterans initiatives. Operation Stand Down serves the Ocean State’s 67,800 veterans and their families while 21 Heroes was established to honor the 21 soldiers from Pawtucket who lost their lives in the Vietnam War. A 21 Heroes memorial dedication will take place the day after the 5K on Sunday, May 21 at Slater Park capping off an historic weekend for veterans causes in Pawtucket.

“We are so pleased to work with the wonderful people from Operation Stand Down and with Terry Nau of 21 Heroes to honor and give something back to the many amazing Rhode Island veterans and their families,” said PawSox Senior Vice President/Club Counsel Kim Miner, who also runs the PawSox Foundation. “In our ongoing effort to build on the PawSox legacy of celebrating our veterans, we were especially pleased to introduce a nightly ‘In Debt to a Vet’ salute during each game at McCoy Stadium last year and that tradition will continue this season.”

One of the premier road races in the area, the PawSox Foundation 5K will start from the McCoy Stadium parking lot, weave through the streets of downtown Pawtucket, and eventually finish at home plate on the McCoy playing field. This new and improved route will help showcase the beautiful riverfront and other reinvigorated areas of the Pawtucket downtown.

“Our veterans and those currently serving in the armed services give so much to us to ensure that our freedom and the American Dream endure,” said Pawtucket Mayor Donald Grebien. “Partnering to promote causes to support our veterans is the least that we can do. Thank you to the PawSox Foundation for working with our local organizations and investing in our community. And thank you to Operation Stand Down and Heroes 21 for ensuring that our veterans are never left behind.”

The race is sponsored by National Grid, Planet Fitness, W.B. Mason, and Coast 93.3. The first 500 participants who register on pawsox.com will receive a free race t-shirt. Pre-registration is $25 per person, and teams of 10 or more will be just $20 per person. On the day of the race, registration will open at 7:30 am and the cost will be $30.

Cash prizes will be awarded to the winners. Festivities will continue after the race with food and entertainment in the PawSox Party Tent area at McCoy. All participants will also receive tickets to the PawSox game on May 23 vs. Louisville at 6:05 pm, and will be invited to take part in a pre-game on-field parade and award ceremony that evening.