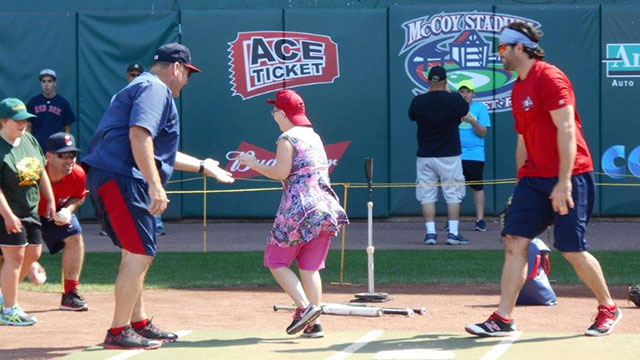 The Providence Business News has awarded their 2016 Community Involvement Award to the Pawtucket Red Sox in an announcement made this past Friday, October 14. The PawSox are one of 12 companies being recognized for business excellence. The award ceremony will take place on Thursday, November 17, at the Providence Marriott.

“The Pawtucket Red Sox have been an engaged member of the community throughout their history,” said Mark S. Murphy, Editor of the Providence Business News. “Their community track record has been especially strong since the 1999 establishment of the ballclub’s charity program, through which the team has donated more than $1 million to organizations serving the underprivileged throughout New England.”

The award marks the second major community recognition that the club has received in the past three years. In 2014, the PawSox received the John Henry Moss Community Service Award presented by Minor League Baseball for outstanding, on-going commitment to charitable service, along with exemplary leadership within its local community.

“To receive this award is an honor,” said PawSox President, Dr. Charles Steinberg. “To serve this community is a privilege.

All of us who love working with the PawSoAnchorx recognize the role that baseball can play in our community. We look forward to doing even more for the people of Pawtucket and the people of Rhode Island.”

With over 120 community appearances made to date in 2016, the PawSox are on pace to triple the number of mascot and player appearances the team made in 2015 to Rhode Island and surrounding Massachusetts communities.

The PawSox have also unveiled successful new community oriented promotions at the ballpark in 2016, such as “My Hero Mondays,” where fans nominated community heroes to be recognized on the field prior to every Monday home game. The club’s new “In Debt to a Vet” in-game program allowed our region’s servicemen and women to be honored and thanked for their service to our country at every PawSox home game.

The support for our nation’s heroes continued at the PawSox Annual 5K Walk & Run in September, where over $6,000 was raised for veteran and military support groups.

Also in the month of September, PawSox players and coaches provided hands-on instruction to over 200 children with various physical and mental disabilities at the Annual Challenger Clinic— led by PawSox manager Kevin Boles.

On the 15th anniversary of the 9/11 terrorist attacks, members of the PawSox community set a club record by donating 71 units of blood for the Rhode Island Blood Center in a revamped drive at McCoy Stadium, generating several times the amount of blood units collected at previous McCoy blood drives.

“The team’s recognition of its unique role in the community, and its determination to use that role to improve that community, is a worthy example for all companies,” Murphy explained. “It makes the PawSox the well-deserved honoree for community involvement in the 2016 PBN Business Excellence Awards Program.”

As playoff baseball continues during the month of October, the PawSox are looking forward to continuing some of their cornerstone community traditions, such as the all-expenses-paid World Series trip to two lucky families from the Boys & Girls Club of Pawtucket.

Last off-season, the PawSox introduced an additional slate of community events and activities at the ballpark, including a Veterans Day Dinner, luncheons around the holidays for local school children, a holiday caravan with PawSox players and Front Office members, a Black History Month celebration with local youth groups in the PawSox clubhouse, and Valentine’s Day rose deliveries to senior centers in the area. These are all programs that the PawSox are excited to continue this off-season, along with soon announcing a major new educational initiative geared towards local students.

Those who are interested in joining the PawSox on November 17 to accept this special community honor can visit www.pbn.com, where individual tickets to the PBN Business Excellence Awards can be purchased.