Honorees to be recognized on Military Appreciation Night 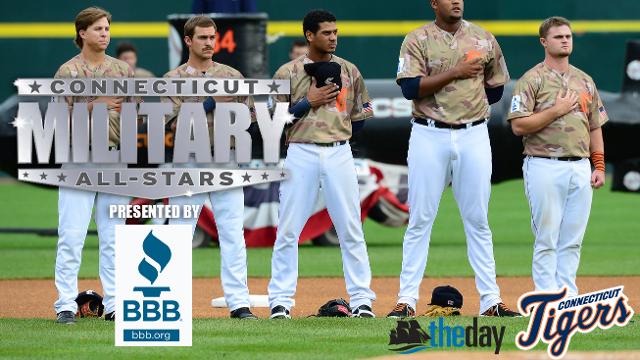 The Connecticut Tigers, in partnership with the Better Business Bureau, announce the 2014 Connecticut Military All-Stars promotion in conjunction with the annual Military Appreciation Night.

Fans are encouraged to visit theday.com/ctmilitaryallstars between June 1 and June 13 to nominate their military all-star to be recognized. A panel of community judges will select the nine nominees they feel best fit the spirit of the promotion to be honored on the field prior to the game on August 8th. In addition, those selected will be part of a commemorative Connecticut Military All-Stars baseball card set given away to the first 1,000 fans through the gates that night courtesy of the Better Business Bureau Military Line.

All current and former military will receive a reserved ticket and a food voucher redeemable for a hot dog, bag of chips, and non-alcoholic bottle beverage for just $7 when showing their military ID at the Dodd Stadium box office on August 8th. In addition, the Tigers will be wearing special “stars and stripes” uniform tops that will be auctioned off during the game on the concourse. Fans will have the opportunity to bid on the jerseys in a silent auction. The proceeds from that auction will go towards a scholarship for a deserving military family to help offset the cost of college tuition through the Better Business Bureau Military Line.

There is also a $2 discount off Premium, Reserved, and Grandstand tickets with a military ID at the Dodd Stadium box office for all Connecticut Tigers games.

The Connecticut Tigers are the New York-Penn League affiliate of the Detroit Tigers and play a 76 game schedule that runs from mid June through early September. The 2014 home schedule begins Wednesday, June 18th against the Lowell Spinners (Red Sox affiliate) with fireworks after the game presented by US Foods! 2014 season tickets, mini plans, individual game tickets, and team merchandise are now on sale! The front office and ticket office is open daily from 9 a.m. to 5 p.m. Monday through Friday and can be accessed in person, at cttigers.com, or by calling 860-887-7962.

This article originally appeared on the official website of the Connecticut Tigers. Click here to view the original story.