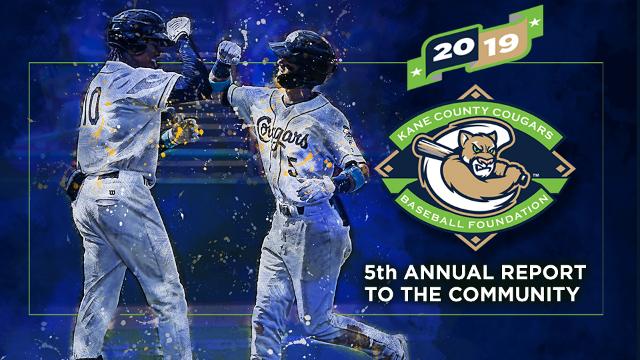 GENEVA, Ill. – The Kane County Cougars Baseball Foundation, Inc. proudly presents the 5th Annual Report to the Community detailing the organization’s charitable outreach in 2019. Each year, the report lists the extensive accomplishments of the Foundation as well as the notable programs coordinated by the Cougars.

The Foundation achieved additional milestones as the five-year record giving streak has soared over 1,500% since 2014. Individual programs supported by the Foundation have reached a total of 24, while cash contributions were provided to 32 community organizations, the largest number of programs and organizations that have benefited from the Foundation in its history. Program highlights include the Cougars Reading Club which now reaches over 450 schools and 138,000 students with the Summer Reading Program now including 89 libraries and over 5,400 student participants. The Foundation also operates two scholarship programs, issuing grade school level scholarships to six local students and five college-level scholarships. Military Outreach continued to see growth, reaching over 1,100 current and former military service members while the Senior Citizens Outreach touched over 2,500 local seniors age 65 and over.

In addition to the expansion of current programs, new programs were added such as Mental Health and Deaf Awareness Night. The Foundation teamed up with local charities that focus on improving the quality of lives for those who deal with mental illness and hearing impairments. For each strikeout recorded by a Cougars pitcher during select nights, the Foundation made a donation with a portion of the total proceeds benefiting the selected charities.

The highlight of the year for the Foundation came at Baseball Winter Meetings in San Diego, Calif. Ballpark Digest selected the Cougars Foundation out of all 160 MiLB teams to receive the prestigious Ballpark Digest Commitment to Charity Award for the 2019 season. Following the announcement that the Cougars had been selected, the Foundation received a congratulatory message from NASDAQ on the famous MarketSite Tower that illuminates Times Square. This marked the first time a MiLB Foundation was featured on the MarketSite Tower.

Across all 24 programs, the Kane County Cougars Baseball Foundation’s charitable giving reached a total of $1,054,980.

“None of these accomplishments would be possible without the commitment of our Foundation’s sponsors, donors and partners,” said Cougars owner Dr. Bob Froehlich. “Their willingness to step up for our community is seen each and every year that we’re able to expand our outreach. It’s amazing to watch the impact of the Foundation stretch far beyond the baseball field.”

The Cougars, Class-A Minor League affiliate of the Arizona Diamondbacks, have been at the forefront of family-friendly entertainment since 1991. In 2015, the franchise became the first Class-A team in Minor League Baseball history to welcome 11 million fans through the gates. A total of 180 former Cougars have reached the Major Leagues including Miguel Cabrera, Nelson Cruz, Josh Beckett, Adrian Gonzalez and Kyle Schwarber and Willson Contreras.