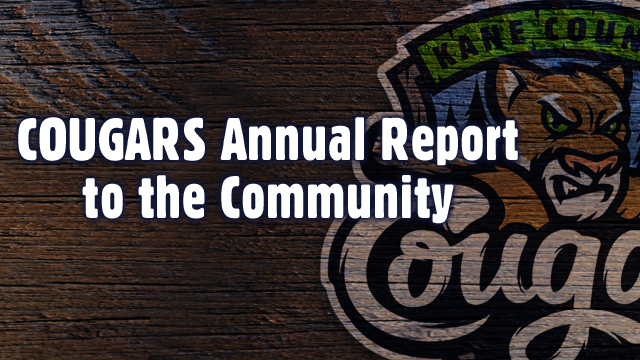 CLICK HERE TO VIEW THE 2016 ANNUAL REPORT TO THE COMMUNITY

GENEVA, Ill. – The Kane County Cougars Foundation, Inc. is proud to present the third Annual Report to the Community detailing the charitable outreach completed in 2017. The report lists the extensive accomplishments of the foundation and the notable programs coordinated by the Cougars.

Five new foundation programs were added in 2017 including the Al Mueller Memorial Scholarship Fund, the D-backs Give Back partnership, AmazonSmile, Highland Salutes and the Es Divertido Ser Un Fan campaign which saw the Cougars selected as one of four teams out of 160 Minor League Baseball teams to participate in this historic Hispanic outreach program.

The 50/50 Raffle, presented by Bret Brizzolara your local Country Financial representative and the Acres Group Pitch-In for Charity are two in-game programs from which a portion of the proceeds benefit specific charities selected by the Kane County Cougars Foundation. In 2017, these two programs generated over $29,000 to support local causes including Fox Valley Wildlife Center, Food for Greater Elgin, Holiday Heroes, Naperville Alive and DuPage PADS.

For every home run that was hit by a Cougars player at home, Paramount Fence made a donation to Emmanuel House which was then matched by the Cougars through the Home Run for Charity program. In 2017, the donation totaled $2,400.

Through a variety of military organizations including the Illinois National Guard, Operation Support Our Troops, Rolling Thunder and the Veteran Tickets Foundation, the Kane County Cougars Foundation presented in-kind donations for Military Recognition totaling $16,844 in 2017.

Various in-kind donations, community appearances, high school seminars, clinics and events show the Cougars on-going commitment to the surrounding community through programs such as the Library Summer Reading Program, senior citizen half-price tickets and food vouchers, the Winter Coat Drive and a partnership with Two Men and a Truck to collect items through the Movers for Moms program.

“Each year we strive to find new ways to give back to local organizations,” said Cougars owner Cheryl Froehlich. “With the additional programs added under the Kane County Cougars Foundation we were able to assist the surrounding community in more ways than we ever have before.”