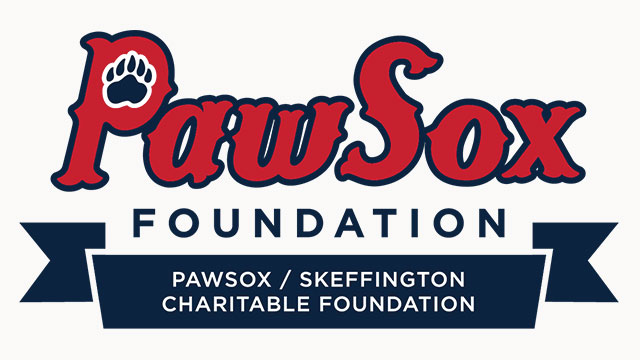 The Pawtucket Red Sox again reached a six-figure charitable milestone in 2016, exceeding $100,000 in cash commitments and contributions to the community. The club and its foundation, the Pawtucket Red Sox/James J. Skeffington Charitable Foundation, have typically combined to reach such a level of philanthropy over the past dozen years.

“We inherited a great tradition of giving, led by the late Ben Mondor and our current Vice-Chairman, Mike Tamburro,” said PawSox Chairman Larry Lucchino, who established charitable foundations with each of his previous clubs (the Baltimore Orioles, San Diego Padres, and Boston Red Sox). “We want to build on this tradition. We believe we are only beginning to scratch the surface of the potential of the PawSox Foundation.

“One of the greatest assets of a professional baseball team is its power to raise funds, do good deeds large and small, and make a real difference in the city, the state, and the region.”

The PawSox Foundation’s largest single commitment this year was the creation of the PawSox Scholars Program, in which two 8th graders, one from Pawtucket and one from Central Falls, were selected to each receive a $10,000 college scholarship upon matriculation, provided they maintain their good standards of scholarship and citizenship.

“The PawSox Scholars program has the capacity to impact lives dramatically,” said PawSox President Dr. Charles A. Steinberg, who was instrumental in establishing similar models in San Diego (Padres Scholars) and Boston (Red Sox Scholars). “Funding dreams is powerful, and we are eager to increase the degree to which the PawSox Foundation does so.”

In addition to efforts in education, the PawSox Foundation also focuses on care for veterans and for children battling cancer.

In the first week of new management in November of 2015, the PawSox hosted a steak dinner for veterans in the PawSox Clubhouse. They did so again in 2016, and in between, they honored a veteran on the field between innings nightly in the new “In Debt to a Vet” program. On Veterans Day, 2016, the PawSox Foundation made a donation of $3,000 to Operation Stand Down Rhode Island in an event attended by Governor Gina Raimondo.

The PawSox Foundation raised more than $10,000 for the Tomorrow Fund, the honored Rhode Island institution that helps families whose children are battling cancer at Hasbro Children’s Hospital. Beyond the financial help, the PawSox raised awareness for the organization and the cause by “Going Gold” on September 1, the beginning of Childhood Cancer Awareness Month. The club honored Rhode Island’s Melissa Murray, whose late son, Dorian, became an international social media sensation (#DSTRONG) when the little boy’s dream of becoming famous in China came true. Throughout the year and at the holidays, PawSox players, executives, and mascots visited the children, bringing cheer, smiles, and gifts.

Throughout the year, the club engaged in community activities, both at McCoy Stadium and throughout Rhode Island. Corporate partners such as the Rhode Island Honda Dealers, Citizens Bank, and Jordan’s Furniture were instrumental in the efforts.

In February, PawSox staff “saw their shadows” on Groundhog Day, as Pawtucket students learned first-hand about the work in a baseball front office. Later that month, Paws and Sox visited seniors and brought them flowers on Valentine’s Day.

Throughout the baseball season, the PawSox were host to thousands of children, some receiving free tickets, some receiving special care from the Make-A-Wish Program, and some participating in the emotion-filled Challengers Program (for those with disabilities). The club and its foundation presented baseball clinics, collected donations for the Rhode Island Food Bank, and helped hundreds of organizations raise funds for their charities. The club also aided various non-profits by providing hundreds of auction items, including a 20-person suite to benefit Special Olympics of Rhode Island.

In October, the PawSox opened the ballpark to the neighborhood for an Open House and then a Halloween Trick or Treat event.

In November, after welcoming the veterans, the club welcomed 3rd graders from the Potter-Burns School in Pawtucket for a Thanksgiving luncheon in the PawSox Clubhouse. Also at Thanksgiving, the PawSox donated funds and in-person support to Pawtucket First Lady Laureen Grebien’s charitable basket drive to help feed needy families.

In December, the PawSox Holiday Caravan featuring Southpaw Brian Johnson visited Hasbro Children’s Hospital and the Tomorrow Fund Clinic. The PawSox then opened their doors to all for a free holiday event, the 2nd Annual PawSox Enchanted Village, which drew more than 1,000 fans.

The PawSox Foundation engaged in many less visible deeds as well, including sponsoring a PawSox-themed house at the Pawtucket Winter Wonderland and making donations to the Pawtucket Soup Kitchen to provide Christmas meals to families.