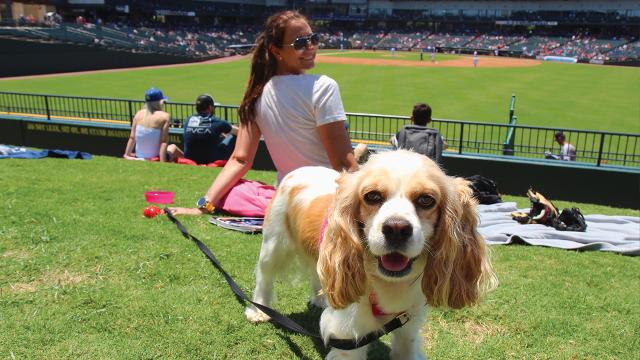 ROUND ROCK, Texas – The Round Rock Express are proud to host 13 unique community awareness nights and drives during the 2020 season, the team announced on Wednesday morning. During Round Rock’s promotional rollout for the upcoming season, the Express also announced the return of Pints & Pups and Round Rock Chupacabras, as part of Minor League Baseball’s Copa de la Diversión campaign, which will each take place once a month at Dell Diamond.

The Express kick off their 2020 community awareness nights schedule with Deaf Awareness Night, benefiting the Texas School for the Deaf on Wednesday, April 22 at 7:05 p.m. against the Omaha Storm Chasers (Kansas City Royals affiliate).

On Sunday, April 26, the team will host a book drive to benefit Carver Elementary School during the 1:05 p.m. game against the Iowa Cubs (Chicago Cubs affiliate).

Round Rock’s annual Cancer Awareness Day is scheduled for 1:05 p.m. on Sunday, May 17 against the San Antonio Missions (Milwaukee Brewers affiliate). St. Jude Children’s Research Hospital will be both the presenting sponsor and beneficiary on the special afternoon when the team honors all those impacted by cancer.

On Monday, May 18, the Express will host a backpack drive to benefit Foster Angels of Central Texas during the 7:05 p.m. game against San Antonio.

Next up, on Wednesday, June 3, Round Rock will host its inaugural Diabetes Awareness Night, benefiting the Juvenile Diabetes Research Foundation, during the team’s 7:05 p.m. game against the Nashville Sounds (Texas Rangers affiliate).

On Sunday, June 7, the E-Train will hold a toy drive to benefit the Salvation Army during the 6:05 p.m. game against Nashville.

The Express will be accepting donations of school supplies to benefit the Round Rock ISD Partners in Education Foundation on Sunday, July 5 against the Oklahoma City Dodgers (Los Angeles Dodgers affiliate).

On Thursday, August 20, the Express are teaming up with Texas Humane Heroes to hold a pet supply drive during the 7:05 p.m. game against Oklahoma City.

Later that month, Round Rock will host Alzheimer’s Awareness Night to benefit Alzheimer’s Texas on Monday, August 31 at 7:05 p.m. as the Memphis Redbirds (St. Louis Cardinals affiliate) come to town.

Finally, during the last home game of the season on Monday, September 7 against the Missions, the Express will hold a children’s coat drive benefiting Coats for Kids, presented by the Junior League of Austin. Fans who donate a coat will receive a general admission outfield lawn ticket to that day’s game.

Fans who donate to one of Round Rock’s other five drives throughout the season will receive a voucher for two reserved tickets to a future Sunday-Thursday regular-season game in 2020, subject to availability and some exclusions apply.

A full list of Round Rock’s community awareness nights and drives is below:

Once a month in 2020, Dell Diamond is going to the dogs! Fans are invited to bring their dogs to the ballpark for Pints & Pups night, presented by Supercuts, on April 23, May 7, June 4, July 16, August 20 and September 3. Each event coincides with discounted draft beer specials as part of Firetrol Protection System’s The Original Thirsty Thursday. Back in 2020, The Original Thirsty Thursday features 24 oz. domestic beers for $5 as well as 24 oz. craft beers for $6.

As part of Minor League Baseball’s Copa de la Diversión campaign, the Round Rock Chupacabras are set to make six appearances throughout the season. The Express will transform into the Chupacabras on April 26, May 5, June 18, July 19, August 7 and September 4. For more information on Round Rock’s fearsome alter ego, visit RRChupacabras.com.

The full list of Pints & Pups as well as Round Rock Chupacabras dates are below:

Fans can now purchase tickets to each of the 23 dates featuring a community awareness night or drive, Pints & Pups event or Round Rock Chupacabras appearance online at RRExpress.com.

Round Rock’s promotional rollout continues on Thursday, February 13 with the announcement of nearly two dozen Express theme nights, then concludes with the unveiling of nightly promotions that fans can enjoy during each Express home game in 2020. Corresponding groups of single game tickets will be on sale each day during the promotional rollout.

Single game ticket pricing for the 2020 season is as follows:

The Express kick off the 2020 season on Thursday, April 9 against the newest member of the Pacific Coast League, the Wichita Wind Surge (Miami Marlins affiliate) at 7:05 p.m. at Dell Diamond. Select single game tickets as well as full season and mini season membership plans are on sale now. For more information on the Express, visit RRExpress.com or call (512) 255-2255. Keep up with the Express on Facebook, Instagram and Twitter!

Portland, Maine– The Portland Sea Dogs have partnered with Goodwill Industries of Northern New England to host the 4th Annual Goodwill Night and Donation Drive at Hadlock Field on Wednesday, August 7th when the Sea Dogs take on the Richmond Flying Squirrels 7:00 PM.

Fans are encouraged to bring bags of gently used clothing, books and other household items to Hadlock Field to donate to Goodwill. Goodwill will have a donation center at Hadlock Field to collect the items. For a list of acceptable donations, please visit Goodwill’s website: http://www.goodwillnne.org/donate.

Fans that make a donation can enter to win a $50.00 gift card to shop any of the 27 Goodwill stores located throughout Maine, New Hampshire, and Vermont. Donations help fund Goodwill programs that strengthen our local communities by getting people back to work and receiving the support they need to lead more stable lives.

Puffy G, Goodwill’s mascot, will be there to throw out the first pitch.

Goodwill Industries of Northern New England provides community resources that eliminate barriers to opportunity and help people reach their fullest potential through the power of work. A social enterprise for over 100 years, Goodwill reflects economic, social and environmental sustainability, with a focus on connecting people to marketplace employment. Our services are funded by revenue from retail and recycling operations, grants, fees, and philanthropic gifts. Please visit www.goodwillnne.org for more information.

Tickets are available for all remaining 2013 Sea Dogs’ home games. Tickets can be purchased by contacting the Sea Dogs Ticket Office at 207-879-9500 or online at www.seadogs.com.

This Thursday, June 13, the Myrtle Beach Pelicans will be holding a Book Drive at TicketReturn.com Field. The Pelicans will collect books to donate to the library at Plaza Towers Elementary School in Moore, Okla. The school was destroyed by a tornado on May 20 and needs books to replenish its library. Fans who bring in slightly used or new books for donation will receive half price admission.